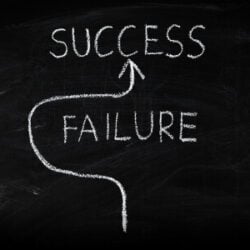 It’s happened to every Dominant I’ve ever known, met, or heard of, and I’m no exception. We all have “that one time” (In my case, I only WISH it was just “one time!”) whose memory makes us feel physically sick to our stomach because something went horribly sideways within our dynamic, usually something that was in our court to control, manage, handle, or deal with. In short, we failed. We failed our submissives. We failed ourselves. We failed to live up to our own ideals, rules, and protocols.

If it hasn’t happened to you yet, then the only possible explanation is that you haven’t been in the lifestyle long enough, and it will. Either that, or you’re so certain of your domly cred that you should probably take a step back and engage in some very serious self-reflection about what exactly you’re doing versus what you THINK you’re doing.

This idea is so ingrained in my conceptual paradigm of what BDSM and kink are and should be that I built it right into my House protocol. “Perfection is not expected, but sincere, wholehearted, honest effort is.” This applies to me just as much as my submissives, and I take great pains to reinforce this point. I know my girls are going to fuck up. I know I am too. How can I possibly hold them to a standard of perfection I myself am incapable of? Anyone who knows anything about leadership or command understands the impossibility and undesirable nature of this, which is why I keep that rule. I don’t expect what I cannot offer, but I damned well can and do expect my girls to always try to “top themselves” in their growth, learning, and service, just as I do for them.

Implicit in this is the notion that YOU WILL FAIL.

Are these examples of failure? Damned right, they are.

Can you get past it? If you couldn’t, there’d be absolutely no point or purpose in writing this article.

Keeping all this in mind, here are five things you should keep in mind to correct your failures without feeling like a failure.

Give yourself permission to fail.

This doesn’t mean you can or should give yourself a free pass on bad behavior, any more than you would for your submissive. What it does mean is that you’re human, regardless of what the media and popular novels would like us to believe Dominants are and aren’t. You need to make this clear to yourself and to your submissive(s), and make sure you have protocols in place for how to deal with the mistakes and failures you WILL inevitably commit. This goes for both sides of the slash and should be discussed as early in the relationship as possible. (I favor doing this in your first BDSM discussion, whether that’s 15 minutes into your first meeting or 15 years into your marriage. Although with the latter, this would seem to go without saying, SAY IT ANYWAY.)

Be open about your failures.

There’s a word for a Dominant who NEVER fucks up, fails, or makes a mistake. That word is “LIAR.” You may be able to convince a completely new “Fifty Shades” sub that you’re the receptacle and essence of The Wan Twue and Only Way™ and therefore immune to the foibles and missteps of “lesser” Dominants, but you and everyone around you know (and your sub will quickly learn) you’re full of shit. It’s not necessary to type out a 50-page deposition of “Mea Culpa” for every mistake you make, but be open and honest about what you did, what you learned from it, and what steps you took or are taking to mitigate or avoid that particular error in the future. It’s much easier to respect someone who owns their mistakes than someone who claims to never make them in the first place because someone who has made mistakes is someone who has pushed themselves and learned valuable lessons.

Seek sincere forgiveness for your failures.

This mainly applies to your submissive because your failures are probably written on their skin, at least for a little while. Be able to say, “I fucked up. I’m sorry. What can I do to make this right?” ALL of this is important. I don’t allow the words “I’m sorry” to be said in my presence if they are not followed by, “How can I make this right?” because without the latter, the former is just a couple of syllables and a sibilant. Own the mistake, apologize with humility, and ask what you can do to fix it.

If you must omit something, the “Sorry” bit is the least important. Actions always speak louder, no?

With this said, you also need to seek your own forgiveness. It’s one thing to say in theory, “I’m human and I’m going to fail sometimes.” It’s a whole different matter when you’ve injured your sub, damaged their trust, and given them reason to question your ability and care as their Dominant. I’ve beaten myself up viciously for weeks on end over something that even one of my subs said wasn’t a big deal. But it was to me because in my own mind I had committed such a grotesque and vile violation of my own ethos, that I sincerely considered giving up my dominance.

This wasn’t a solution, and I knew that then and know it now. No one could have given me the business harder than I gave it to myself, and I did some real damage to my relationship in trying to make things right. By forgiving myself for failing, I was able to tend to their needs, mend the relationship, and overcome the mistake.

Remember when I said, “I’m sorry” is the least important thing you can say, and doesn’t hold a candle to your actions? Yeah…that’s where this comes into play. You need to listen with an open mind and heart to what your sub is telling you. If they say you don’t have to do anything except be a bit more careful in future, accept that and trust that they know their own mind and heart. If they says you do need to do something, you do it. Always remember who has the real power in a D/s dynamic, because your sub can stop the whole thing with one or two words: Your safeword or “Release me.” Also, keep in mind that by doing so, you are setting an example for how you expect them to behave as well. You’re out of your mind if you think you can expect them to own their mistakes and make them right if you cannot do the same.

Resolve to do better next time.

So you’ve acknowledged where you screwed up. You’ve hashed things out with your sub and yourself. Maybe you cried a little. Maybe you had a few drinks. Maybe you passed a sleepless night counting cigarettes as you burned through them and stubbed them out. (I’ve done all of the above, myself.) Now you have to resolve to do better by making an actionable, reasonable plan. Simply saying “Well, won’t be doing THAT again!” cheats both of yo, because maybe they were enjoying THAT until “it” happened, and you learned something from it. You know better. Now it’s time to DO better.

This involves sitting down with your sub and figuring out what went right, what went wrong and a protocol that allows both of you to work in tandem to prevent the same thing happening in future. This shows that you’re committed to not repeating your mistakes, but you’re also not afraid to try something you failed at once until you get it right. In doing this, you set the best possible example for your submissive, your House (if you have one), and for others who may look to you for guidance, informatio,n or mentoring.

And isn’t that what we all want to be as Dominants?

We’re human first, Dominants, Tops, Sadists, etc. second. Failing just points out our humanity and, hopefully, teaches us to accept the dominance our submissives entrust to us with a heart that is open and capable of dominating, while maintaining humility. You’re not always going to be “on” or do it perfectly, whatever “it” might be, but you can fail without feeling like a failure and, in doing so, gain more respect from your submissive(s) and those around you.