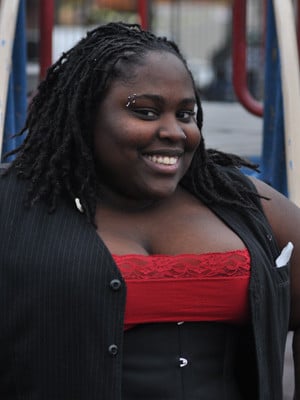 View All Videos By Sara Vibes

Sara Vibes was born and raised in New York City. She is a black, polyamorous, queer, kinky, dandy, top-heavy princess. Vibes is a musician, writer, sex blogger and educator in training and flags silver lamé for star fucker. She was abandoned in a hospital in the Bronx in the late 80’s weighing under two pounds and addicted to crack. She was adopted by a white Jewish women with cerebral palsy from Brooklyn and a black Christian man from Jersey with spina bifida who both passed before she was 9. Vibes’ mother was a social worker and sex therapist who specialized in sex and disability. Her book selections encouraged and influenced Vibes exploration into sex and sexuality.
Vibes is an active member in BDSM and LGBT communities in New York City and beyond.
She is a founding member of Nina Hartley’s SexWise.me, a sex-positive online community, and worked as a curator and contributor of SexWise Magazine. Vibes has been interviewed by Nerve magazine and appeared on Reid Mihalko’s “Queer, Poly, & Under 30″ panel at Dr. Carol Queen’s Center for Sex and Culture in San Francisco. She has taught with her partner Indigo at Playhouse in Baltimore and recently hosted “Sexxy Game Night” at Dark Odyssey: Winter Fire. She will also be a contributor to Perverts of Color Anthology.