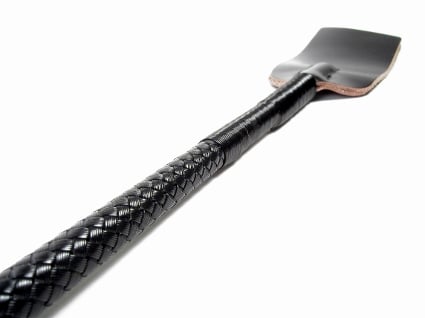 The strangest part about it, though, is that it’s not actually designed to cause any pain. The origins of the riding crop are not actually known – it is a tool used in equestrian sports since the 18th century, certainly, but it is merely one of many tools used to get the horse’s attention. Not through pain, though – the length and flexibility of the rod is to help the rider reach behind themselves and tap their horse on the rump. Much like the purpose of a buggy whip is to make noise, not actually strike the animals, the riding crop is the physical equivalent of giving a friend a gentle “nudge” out of the way.

Why the vicious reputation? Part of it is a simple confusion of terms from the classic “Venus in Furs” by Von Sader-Masoch (the author who inspired the term “sado-masochism”) in which the sadistic protagonist is often referenced as going riding, and in another part is mentioned cracking a whip viciously. This has led people to imagine the woman in prim riding gear, including a crop; but as anyone who has watched some of Dov’s whip videos knows, noise-making whips aren’t anything like the delicate little crops.

There have also been many instances where authority figures have used the crop (or quirts, very similar) to inspire fear. The image of the general marching down the line of soldiers, an ivory-handled crop under his arm, is portrayed in many movies. However, these were usually more decorative than functional – sometimes going so far as to have gold handles and fine inscriptions (one of the more famous belonged to an influential southern politician Preston Brooks, who had the inscription “A whip for the horse, a bridle for the ass, and a rod for the fool’s back”).

Occasionally these kinds of dramas are shown with some instance of the officer discovering some violation and striking the offending soldier. However, usually this shows the soldier having a mark much more similar to a caning, not a riding crop. In fact, to do damage or leave marks you actually have to be using a crop incorrectly. In her series on riding crops Mistress Alexandra Snow shows several varieties, all of which have one thing in common: they have tiny pieces of leather on the end, and that is the only part that is supposed to be touching the body.

There is a long fiberglass rod (or, in older classic crops, made of rattan or bamboo) underneath the nylon or leather sheath that runs along the crop shaft. However, that is not designed in any way for impact. This turns the crop as used in BDSM into a sensation play toy, not a punishment tool. Mistress Snow shows this quite effectively on her bottom Kelle, not only using the riding crop on her ass but also on the more delicate and sensitive pussy. By using the crop correctly she is able to stimulate Kelle’s mons, labia, and even lightly slaps her clitoris to great effect. However, this requires extreme care, not violence.

About the only instance of the correct use of a crop as a weapon is also anecdotal. In the Sherlock Holmes novels by Sir Arthur Conan Doyle the detective uses a specially made crop as a kind of substitute for a sword – a crop with a reinforced rod and a weighted handle (lead shot, not gold) that could adequately fence with anyone armed with an actual blade. While there are some rumors of these actually existing in Victorian England, it is also possible that they are simply the creation of a talented author for a world-famous detective.

Regardless of the actual history of the riding crop, it remains one of the more fashionable accessories for the kinky enthusiast. Especially if you want to avoid any chance of marking but still have that feeling of being a truly stylish dominant, the crop can be an excellent tool to choose. Once you pick the one you like – and they do come in a huge variety – you can start creating your own history, with a spring in your step and a vicious-sounding “swish” in your hand.