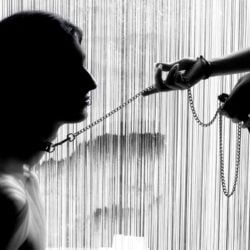 Why is that necessary? It’s because trying to maintain that kind of relationship outside the bedroom gets very, very complicated. While there are all kinds of power imbalances in society, most people tend to prefer at least the appearance of things being more equal. Things that come across as “dominant and sexy” in the bedroom often appear as “selfish and douchebaggy” in everyday life.

However, it’s not impossible. There are several qualities of a person who can be a constructive dominant both in and out of the bedroom that can be identified.

Mollena Williams has spent years exploring her role as a submissive and slave, and it’s led to a very effective system of vetting your dominant partner. Dominance, like submission, comes in many different varieties, and it’s important that partners make sure they are complementary before attempting to create a D/s relationship. A military-style dominant might not mesh so well with a diva, but if you’re a submissive who likes taking care of an ego-driven performance-oriented dominant the two of you might be able to establish a fun and sustainable dynamic.

That’s one of the roles that Shay and Stefanos enjoy in their relationship – he’s a Rock Star, she’s his Handler. They also enjoy other roles as well – such as Owner and pampered kitty (Shay’s “meow” is absolutely adorable. How did they find these roles and adopt them in the course of their very-real marriage? At least part of the answer lies in the fact that Stefanos understands that as a dominant partner he also needs to be flexible to the needs of his submissive. It’s entirely possible to negotiate changes in roles and relationships while still maintaining your aspect of dominance. Both Mollena in her ” Diplomacy in D/s” and the writings of Master Obsidian explore how flexibility is an essential quality of a truly dominant person.

“Shadows of the Dominant: King, Tyrant, Weakling” goes even further into that idea. Dakadom is a philosophic dominant who links the Jungian archetypes to styles of BDSM. While that might seem a little pedantic at first, when you look at the words – “weakling, tyrant, king” – it’s actually easier to see them manifest. Have you seen a “master” who is wishy-washy based on the moods of the submissive? Or the Owner who changes their mind on a whim, regardless of the needs, wants, or realities of their sub’s situation? On the other hand, think of a King or Queen, who’s primary concern is the care and welfare of their subjects – who understands that along with the power and privilege comes a responsibility. When you think in those terms, it becomes more clear how a “quality dominant” would act.

Of course, you still want to keep it hot, and punishment in a D/s relationship can be both constructive and sexy. The key is to look at the boundaries of a relationship as being creative constraints rather than limitations. An effective dominant understands the fine art of negotiation, both in terms of “broad strokes and fine details” as Selina Minx calls it. By continually exploring the details and deepening their understanding of their submissive a dominant can come up with endless variations for both punishment and reward. It’s in those finer details that a dominant can get a reputation for mind-reading, but really it’s just a matter of paying attention.

Most importantly, though, a dominant partner needs to understand the experience of consent. That is more than just the initial “yes” for playing; a D/s relationship is a constant re-creation of consent between both partners. It’s important to understand that in a long-term relationship sometimes that “yes” will have to change into “not right now…” and perhaps even into “not any more.” Through good communication and that flexibility mentioned above a dominant partner can maintain the sexy control and rulership while still letting the relationship flourish and grow.

These are just a few of the essential qualities of a good dominant partner. What else have you found? Let us know in the comments!