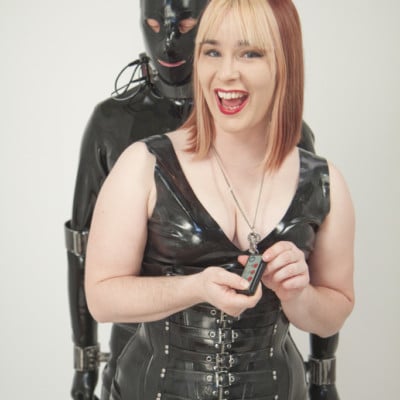 View All Videos By Alice In Bondageland

From the time she was old enough to watch Adam West’s Batman on television and tie up her Barbie dolls, Alice knew that she was kinky.

Alice came of age in the shadow of kinky San Francisco. She likes to say that the only time she has ever used a fake ID was to start attending the Folsom Street Fair at age 15. By 16, she was legally emancipated from her parents and petitioning to attend local munches… SM Odyssey wisely waited until she turned 18 to invite her to events and threw an ‘Alice is Finally Legal’ party that is still talked about.

She is notorious for public bondage ‘stunts’ all over the country, but especially for public nudity and ‘gimp’ performance art in pervy San Francisco (where it is both legal and encouraged). She is well known for wearing latex to the opera and is a very visible force for kinky youth education and outreach.

Alice has a huge range of kinky interests after 12 years down the rabbit hole. Her current favorites are heavy bondage, rope bondage, forced feminization, latex encasement, strap-on training, mummification, chastity and hypnosis. She also has a personal lifelong foot and shoe fetish.