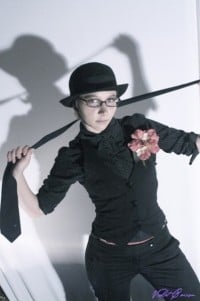 View All Videos By Maggie Mayhem

At age 18, Maggie Mayhem started work as a volunteer HIV test counselor at a free and anonymous clinic with little idea that it would change her life forever. While simultaneously exploring her sexuality alongside queer and sex positive activists she became involved with a university leather club and eventually took on a role as president. By the time she graduated in 2007 she was the coordinator of the entire HIV testing program and a kink educator in her community.

After moving to the Bay Area, Maggie began modeling for fetish websites like Kink.Com learning even more about professional sex. In 2009 she traveled to Tanzania, Africa for grant work in HIV prevention and met her partner Ned not long after. By day, Ned worked in physics lab but by night he and Maggie were performing together on camera in kink and queer adult productions. In 2010 they traveled together to Haiti to assist in the recovery efforts after the earthquake and began constructing the PSIgasm. By 2011 the PSIgasm was onto its third version and they opened their own porn site called Meet The Mayhems. Their adventures are still unfolding.