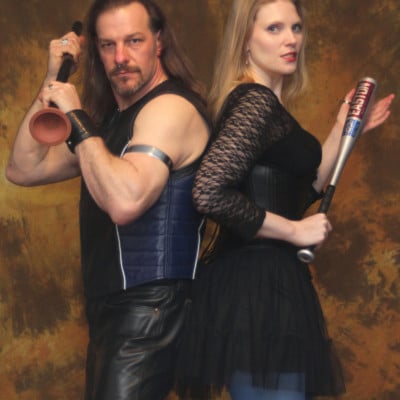 View All Videos By Stefanos (and Shay)

As Purveyors of Perversion, Stefanos and Shay are well known for teaching classes that are entertaining (they’ve been called “better than a Vegas act”) and packed with useful and applicable information. After being part of the Minnesota scene for several years, they moved to San Francisco in September of 2005 and hosted their first event before they unpacked their boxes (December 2005). As Steward and General Manager of Kink.com’s The Upper Floor, Stefanos hosts monthly community events, where Shay is also a performer. In 2010, Stefanos was honored to be named “Mr. SF Citadel” and was 1st runner up in the Mr. SF Leather contest. Together they created the Case Scenarios Dungeon Monitor training for the SF Citadel, which has been the Citadel’s official DM training since 2008. Both Stefanos and Shay primarily identify as Dominants, but both have switched during their combined 15+ years in the scene. They identify as evangelical polyamorist play sluts who have been known to moonlight as fluffy service tops.