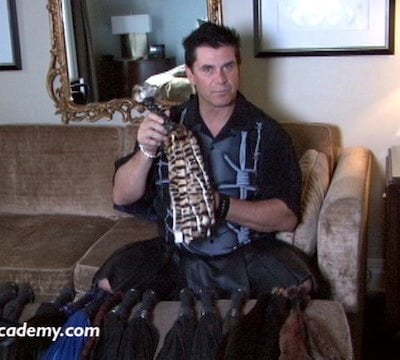 Master Blaster of the Universe

View All Videos By Stormmy

Stormmy is active in the Seattle BDSM community along with his two slaves Miranda and Nichole. Family and community are a big part of his life and he strives to give back to the community by counseling and mentoring people as much as he can. A big supporter of the CSPC, you can find him and his girls there several nights a week, playing, helping with classes and tastings or just visiting with friends. Coming from a Native American background, Spirituality is very important to him; and he incorporates it into his M/s relationships, his classes and his play. As the leader of Team Fluffy, he is also known for his edge play, and can often be found trying out new devious ideas at play parties and conferences. Stormmy is well known for his flogging and whip techniques as well as other types of impact play. With his extensive wrestling background he is a great teacher of rough body play and takedowns. He loves blood play and can frequently be found putting his medical knowledge to use with hooks and needles, suturing and many other kinds of medical play. Stormmy is the Director of Paradise Unbound, Seattle’s kinky campout put on by the Center for Sex Positive Culture. He has presented on topics ranging from rough body play and flogging to relationships and spirituality at the Folsom Fringe, Leather Reign and at Paradise. He has also taught classes at Wild at Heart, the CSPC, ACES and PBS and helped to facilitate the hook pull at Paradise.