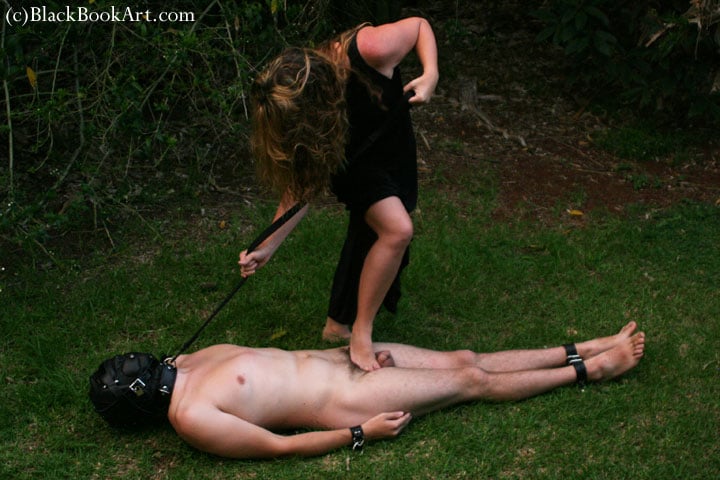 One of the most silly myths of the kink world is the idea of the “natural” dominant. Sometimes this comes in the form of someone (usually a man) calling themselves an “Alpha”, sometimes it’s simply someone who read a novel and thinks that a new set of stilettoes, a riding crop, and an unpleasant disposition is all they need to “dominate” their partner.

While it’s true that some people do learn it earlier than others, power is something that definitely can be taught, developed, and increased throughout life. Presidents and CEOs and actors and public speakers often have coaches to teach them how to dominate their environment. Here on the Kink Academy there are a whole bunch of instructors ready to do the same thing for you.

It’s a good idea to start with the basics and then work your way to more complicated subjects. Chicago dominatrix Miss Simone lays out a great primer in her Guidance for Newbie Dominants clip which does a good job of giving you a realistic framework for your dominant persona. Are you wanting to just be dominant in the bedroom? Only for certain scenes? Or are you looking for some kind of relationship where the power exchange is constant? All of these are possible, and none of them is better or worse than any other – it’s just a very good idea to know what it is you want.

You can get a deeper understanding of the various kinds of domination and the psychology behind them from the philosophical ideas of Dakadom. He maps out dominant archetypes for males such as King, Tyrant, and Weakling and even links it into Jungian shadow work. Scotty, who also has many clips on Kink Academy about a wide variety of dominant techniques, talks in particular about his perspective on being a male dominant with a female partner.

That’s all stuff that happens “under the hood”, though. There’s also the school of thought that you can always “fake it til you make it” – that is, if you act dominant, you will begin to feel more dominant. There is psychological research that backs up the idea that simply by changing to more dominant body language you not only increase your own power but you increase the perception of other people that you have power. Public speakers often go into “power postures” such as holding their hands wide over their head or standing with their feet balanced further apart. These subtle changes can instantly create an aura of power around you.

Changing your clothing habits can also make a difference, as anyone who has invested in a pair of leather boots can tell you. Dominant appearance doesn’t have to be all about leather, though; business suits, military style uniforms, even a clown costume can be entirely overpowering if it’s worn with confidence. Listen to some of costume designer Ivy Miller’s suggestions for ”Domwear” to find more ways to feel the part that you are working to develop.

There’s no reason you can’t start practicing the more physical parts of being dominant as well. For example, leatherman Daniel gives a crash course (pun intended) in manhandling that is both practical and entertaining – mainly because you can see just how much fun his partner Dannika is having as he shows how to safely overpower her. His clip about how “Real Doms Do Eat Pussy” is also worth a look to reinforce the idea that there is no such thing as a dominant or submissive action; there are only dominant and submissive intentions.

That is why you can even use something like shopping as a form of dominance. Princess Kali explains how this is only one form of Financial Domination that is enjoyed by many submissives serving their mistresses and masters. Another way to dominate is to create Submissive Improvement Protocols such as exercise or diet regimens that are reinforced by the power exchange relationship.

There are some cautions when you’re getting into that kind of psychological territory, and that’s why people like Princess Kali and Sinclair Sexsmith lecture on the subjects. The more involved you are with your submissive’s life, the more complex these kinds of behavioral modifications can become. At certain points you may have to deal with  a challenge from a Submissive – the way that you react can have far-reaching implications for your relationship. Penny Barber gives great examples how to deal with challenges in ways that further reinforce your dominance and control. Often a challenge is simply the submissive’s way of trying to get attention – basically being a “brat” – and if that’s not part of your dynamic then it shouldn’t be rewarded.

The many different layers of dominant behavior shouldn’t discourage you from working on developing your own persona. The fact is that even “established” dominants are always developing and improving their own powers. “Dominant” is an adjective, not a noun, and that makes it more a path than a destination. Follow the lead of others who have gone before and you’ll be able to become your own unique and powerful persona.