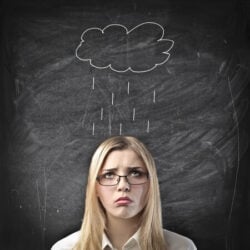 It’s the day after an event. It was a great event, and you played so hard you can still feel it, the echoes of the dungeon music still echoing in your ears. The people you met! Even the new friends feel like old pals, and one or two of those people still give you those sexy butterflies in your stomach. And the mind-blowing classes and performances and conversations…

…and today, the day after, you feel like shit. Your head feels fuzzy as you think of the people you won’t get to see for a while, and the thought of trying to go back to “normal” life feels totally depressing. What’s the point? You just want to go back to that magical place…

This is the natural physical reaction to stress – even “good” stress (also known in neuroscience circles as “eu-stress”). At kink events where you are pushing yourself physically, mentally, emotionally, and sometimes even spiritually, a lot of what keeps you going is momentum – the next play date, the next class, the next special party, the next meal. When that kind of “next-thing” excitement goes away, your stress-response goes away too – and what’s left is a whole bunch of fatigue, physical and also often emotional.

With a summer of events ahead, it would be a good idea to pack your con-drop recovery plan along with the flogger and the sunscreen.

One of the first ways to fight the drop is to start during the con. Lee Harrington, among others, recommends the 3-2-1 rule: at least three hours of sleep, two meals, and one shower per day of the con. That is the minimum, of course – most humans should get at least six hours of sleep, but with all the fun things happening at a convention, that might not happen.

Another way to help restore your body’s neurochemical balance is through physical activity. It doesn’t take much – a simple walk around the block can work some amazing changes on your mood – but if you really want to mix up your con-recovery with a little kink you could always do some stretches particularly designed for bondage. Pro-tip: even though you usually hear about bottoms doing stretching, it’s good for tops, too!

“Carbs & Cuddles!” That’s what Lucky Albatross recommends in her segment on self-care after a scene. That prescription applies to conventions as well – just think of them as one Great Big Scene. Physical contact increases the production of oxytocin, which can help fight that feeling of abandonment or loss that can follow a really good con. That is easiest if you have a cuddly human nearby, but a pet or even just snuggling under a blanket can do that.

In fact, Lucky has another entire video about surrogates for after care. This is useful when you aren’t able to get the physical contact you want from the person you have the scene with, or if the people you connected with at a convention are returning off to other states or even countries. You also might want to make sure to set up some surrogate post-con activities if you explored some sort of edge play, like humiliation play, interrogation play, or even more taboo topics. Nayland talks extensively about what kind of effects to expect after that kind of intense mental play.

The “carbs” are also an important part of this! One of the big mistakes people make after a con is to try and make up for what they see as a weekend of poor food choices. It’s entirely possible they were poor food choices, but right after a con is not the time to decide to have a new diet or some sort of purge or de-tox. Resa Amnesia, who has a background in nutrition science, explains:

…depression (the feeling, not the mood disorder) is related to decreased levels of serotonin in the brain…denying your body carbohydrates during a time when your brain is already struggling to catch up from lower serotonin sets you up for more long-term frustration and sadness.

Stick to complex carbs, lean proteins, lots of fresh fruits and veggies, and drink more water than usual to help rebound from “con drop” more smoothly and safely than with a diet.

Most of all, do what you need. Sarah Sloane gives one of the best overviews of why people in kink want to be “driven to tears” in the first place, and how to recover and function in everyday society afterwards. Recognizing the needs you’ve fulfilled and the growth you’ve experienced through being at a convention can go a long way towards integrating the hot kinkster with the “normal” human being you have to be for the rest of the world.

Take care of yourself! Because the next kink event is right around the corner…

This was originally sent out as our monthly newsletter, but by popular demand it’s been posted here for everyone!

Want fabulously kinky advice just like this delivered to your inbox once a month? Of course you do!