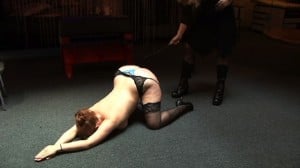 If you’ve read much here at Kink Academy, or attended any of Princess Kali’s workshops, you know that we are big fans of silly. Even when we’re talking about something as serious as dominant archetypes we often do it in a way that incorporates humor.

This is just a part of kink that can happen – we even turned a random fart into a teachable moment in one of Scotty’s spanking videos. But what happens when you don’t want to be silly? When you want to experience some of the deep emotional catharsis that often draws people to kink in the first place?

How do you get serious about your kink?

One of the key factors is creating an environment that lends itself to seriousness. This starts with things like lighting, music, or even some kind of ritual such as collaring. It’s not hard to come up with one – in his video, Panther Prowls explains that “…it’s not so much the things you do as what they mean to you that really creates a meaningful ritual.” This means that rather than following someone else’s pattern you can use the words, movements, and materials that are meaningful to you and your partner.

That doesn’t mean you can’t  follow someone’s ritual, either. Whether it’s borrowing from some excellent erotica such as The Marketplace or watching Cleo Dubois’s Rituals for Collaring and Starting a Scene and copying her word for word. The key is to pay attention to what resonates, what helps put you and your partner into that kind of headspace, and keep what works and get rid of or change what doesn’t.

When it comes to the process of a scene the activity is often enough to keep your mind serious. Especially in a process such as flogging or bondage suspension the top’s responsibility for the bottom’s safety brings a laser-like focus to the process as it’s happening. The bottom, meanwhile, has the dual job of both being present in the sensation and also mindful of the state of their body. It’s a tricky dance to do – both letting the top take sensations to more intense levels and at the same time recognizing when things are getting too intense, and calling “yellow” or using a safeword.

Skilled players have an understanding of physiological triggers that can deepen the sensations – such as Madison Young’s series of stretches that help the bottom’s body more easily adapt to various positions. It’s a rookie mistake to think that the mind and body are two completely separate things in kink, and the heady mix of neurochemicals that come with the adrenaline and dopamine response affects mood just as much as any meditation or hypnosis.

It’s also important to recognize when a response that seems humorous may actually be serious. When Naiia first did needle play – a scary boundary for her – she found herself giggling as her master put the tenth needle under the skin of her breast. “I didn’t think he was less domly, and I wasn’t any less scared and turned on,” she said. “That’s just how my body responded at that time.”

Many couples also know how to reinforce each other in maintaining the mood of a scene. Stefanos and Shay demonstrate various ways submissives can help guide a scene. It’s not about “topping from the bottom”, but rather “…phrasing requests in a certain way, or using their body language to communicate both consent and pleasure, submissives can contribute to the dynamic of scene without losing headspace.” The more you play, especially with consistent partners, the better you can both get at this skill, until with a single look a dominant player might put their partner into “sub space”.

If you’re going to take this kind of deeper journey into kink, it’s important to not leave each other hanging (yes, even from ropes). It can be difficult, especially for new players, to figure out exactly how to bring things to a close when you’re in the midst of everything. Some play makes it pretty natural: eventually you have to untie, take out the needles, put down the whip. Often this is where people will relax the serious mood – but it doesn’t have to be that way. You can make the slow release of the ropes, the cleaning of the blood, the soothing of the welts into their own kind of ceremony. Often various kinds of positions can help with this – either the submissive in a pose or perhaps the dominant making use of a strategically-placed boot.

Aftercare can vary widely from individual to individual, but that doesn’t mean that it should ever be discounted. Even the act of saying “Hey, we done here?” is a form of aftercare for some. Ideally it’s negotiated in advance, but making sure your partner has what they need isn’t just a matter of serious kink, it’s a matter of responsibility. Remember that you are also responsible for your own aftercare as well.

It’s also important to remember that “serious” doesn’t mean “frown.” Authentic emotions come in many forms, and an angry laugh can be as serious as a whimpering tear or an orgasmic scream. It’s entirely possible to have a serious tickling scene – as long as you are present and focused on what’s going on.

Take your kink as seriously as you like. Like everything else, there’s no “one true way” – just the way that works for you.