You’d think it would be easy – consent, that is. It’s just a matter of saying “yes” when you mean “yes”, and if you don’t say “yes”, people will just accept that, right?

Ah, if only humans were that clear cut. In spite of the efforts of simplified slogans (“Yes Means Yes) and metaphors such as “Consent is like tea – if someone was asleep, you wouldn’t give them tea, would you?” there seems to still be some difficulty in finding one solid rule to cover all the aspects of consent.

That’s because while consent can be simple, it can also be complex. Even outside the kink community sex-positive communities are starting to accommodate the different kinds of consent practices out there. For example, in San Francisco David Pullman came up with the “dog/cat/bird” metaphor: “…those who say they are dogs indicate they are open to being approached and touched; cats must be asked before things are initiated; birds are the most selective in choosing and do not welcome direct advances. But animals are free to evolve.” That’s not simple at all – but it sounds like it can be beautiful.

At the Kink Academy, we’ve been talking about the many facets of consent for a long time. We’ve talked about how it works in the kink community, and how it is not only essential, it can be sexy, and not only sexy, but even kinky.

It’s necessary, because what in films looks like “romance” is often “violation” in real life. For some people it wasn’t until they read books like 50 Shades that they even realized consent was a process that was needed for kink. Thankfully, educators like Marcia Baczynski has a primer on What should you know before starting any kind of kinky play. Are you looking for a power exchange? Is sex involved? How do you deal with giving consent to yourself, especially if you’re wondering if you can be kinky and feminist? Spoiler alert: in that video, Lilith Grey explains how negotiating consent is an inherently feminist act.

Kitty Stryker covers the fact that for some people consent is a verbal act, but that for others it is non-verbal. That’s important in order to keep from overlooking the privilege of people who have no problem both being aware of and expressing their sexual desires. This is why some educators also have trouble with the idea that consent is “given”; instead, they like to think of consent as something that is constantly being created between partners. Like any creative skill, it is something that you get better at with practice.

What if you’re not that good at it yet? That’s ok; Harold Henry talks about what experiencing consentis like, including the ways it can be different for men. That may be a strange idea – that a gender can change the way you experience consent – but a culture of toxic and fragile masculinity keeps a lot of people ignorant about the most basic concepts (which is why colleges usually have to start with the remedial “yes means yes” level of consent education. 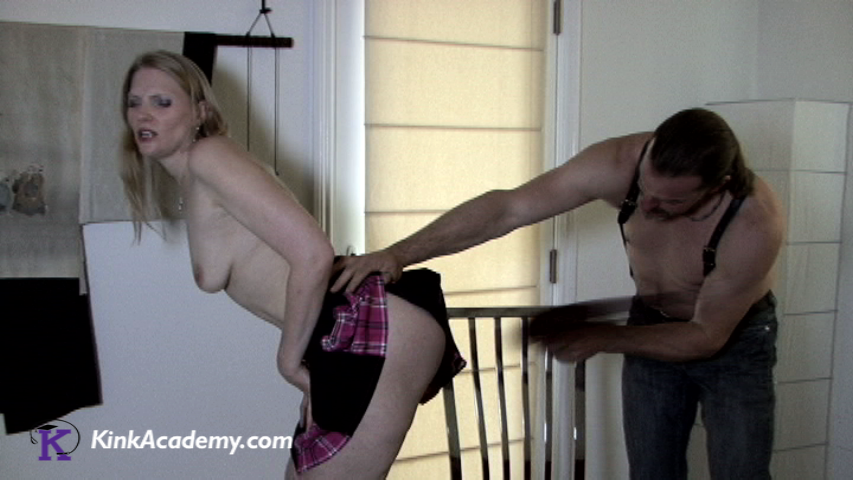 Talking about consent is one thing; how about seeing it in action? James Darling and Tina Horne leverage the fact that Kink Academy is explicit sex education as they demonstrate consent during trans sex (as a side note, KA video editor Gray says this is the hottest clip on the entire site).

“But if I have to ask for consent, I’m not being Domly!” says the inexperienced kinky dominant. Thankfully, it’s not hard to demonstrate how consent can be an active part of making scenes hotter: watch the way Shay praises Stefanos’ sure hand with a flogger, as well as shaking her pretty ass, to show how bottoms helping can communicate consent during a scene and keep you out of the “yellow” and “red” zones.

One of the most complex parts of consent is when people want to play with “consensual non-consent”: in other words, “I want to consent, for a period of time, to anything you choose to do, without the ability to change my mind.” To cover this topic we turn to one of the greatest teachers, world-renowned Mollena Williams. She lays out in part 1 and part 2 the ways you can turn this hot fantasy into reality – negotiating in a way that keeps things safer for all the parties involved. It doesn’t have to be as complex as a big dominant/submissive scenario; “Surprise Sex” is a form of consensual nonconsent, and Darian Gavin explains how his partners negotiate that kind of play with him in ways that keep things hot and happy.

Did we mention consent can be complex? But like many complex things, it can also be beautiful. Whether it’s here on Kink Academy or elsewhere, regardless of your experience level, it’s worth your time to to learn more and practice more so that you can have more kinky sexy fun!